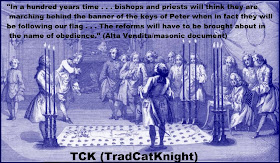 Along with the modernists, the Masons and Communists have rejoiced at the Council's outcome. Just as the authors of the Permanent Instruction of the Alta Vendita had hoped, just as the Communist infiltrators spoken of by Bella Dodd had hoped, the notions of liberal culture had finally won adherence among the major players in the Catholic hierarchy. Freemasons and Communists have celebrated the astounding turn of events wrought by the Council. They rejoice that Catholics have finally “seen the light,” and that many of their Masonic principles have been sanctioned by the Church.

For example, Yves Marsaudon of the Scottish Rite, in his book Ecumenism Viewed by a Traditional Freemason praised the ecumenism nurtured at Vatican II. He said:

Catholics ... must not forget that all roads lead to God. And they will have to accept that this courageous idea of freethinking, which we can really call a revolution, pouring forth from our Masonic lodges, has spread magnificently over the dome of St. Peter's.

Yves Marsaudon was delighted to add that “One can say that ecumenism is the legitimate son of Freemasonry.”

The post-Vatican II spirit of doubt and revolution obviously warmed the heart of French Freemason Jacques Mitterand, who wrote approvingly:

Something has changed within the Church, and replies given by the Pope to the most urgent questions such as priestly celibacy and birth control, are hotly debated within the Church itself; the word of the Sovereign Pontiff is questioned by bishops, by priests, by the faithful. For a Freemason, a man who questions dogma is already a Freemason without an apron.

Marcel Prelot, a senator for the Doubs region in France, is probably the most accurate in describing what has really taken place. He wrote:

We had struggled for a century and a half to bring our opinions to prevail within the Church and had not succeeded. Finally, there came Vatican II and we triumphed. From then on the propositions and principles of liberal Catholicism have been definitively and officially accepted by Holy Church.

L'Unita, the official publication of the Italian Communist Party, brazenly gave advice to Pope Paul VI regarding Archbishop Marcel Lefebvre, who led traditionalist opposition to the conciliar liberals and had militated for a conciliar condemnation of Communism: “Be conscious of the danger that Lefebvre represents. And continue the magnificent movement of approach begun with the ecumenism of Vatican II.”

The Communists were equally delighted with the results of the Council. As the Italian Communist Party declared at its 11th Party Congress in 1964: “The extraordinary ‘awakening’ of the Council, which is rightly compared with the Estates General of 1789, has shown the whole world that the old politico-religious Bastille is shaken to its foundations.”

The ultimate end of the diabolical Second Vatican Council will be a formal unification of humanity, of all religions and can any doubt this with the recent actions coming from Rome?  Yea, this plan has long been in place and it is only a matter of time now. Catholics must continue to educate one another in this fight against the new religion and this insane dream of "absolute equality". We have Our Lady, the Rosary, the Scapular, we have the Sacraments and the Sacred Heart of Christ, therefore, the WAR wages on!