6 Reasons Why Francis Is Not the Biblical False Prophet


6 Reasons Why Francis Is Not the Biblical False Prophet
BY: ERIC GAJEWSKI
Francis does not fit the bill for being the False Prophet from Scripture itself.

I have done similar articles before in the past but only speaking on a few reasons as to why Francis is not the Biblical False Prophet.  After some time now, I, add more reasons to the list.  This is important to write about because I see so many notable traditionalist’s suggesting he is.  Francis most certainly is a modernist destroyer.  He most certainly is an antipope who, he, himself, has said, might lead the Church into schism but the biblical false prophet he is not. Recall Simon Perez (Israel’s puppet leader) suggesting to him that we needed a U.N. global religion.  Francis did not deny that this was a bad idea.  Oh, the propaganda has been laid out but the New Age makes it clear that Francis is just a puppet of theirs and not the False Prophet. Let’s take a look at these six specific reasons.

Francis is not calling down fire from heaven.  Scripture and the esteemed theologians of the Church say the biblical False Prophet of the Antichrist will have the ability to stir up false signs and wonders.  He will literally be able to cause fire to fall from the heavens and have control over the weather (via pseudo science, geoengineering).

I said sarcastically in an earlier piece on the same matter, that, Francis, can barely tie his own shoes let alone command fire from heaven.

Even amongst the liberals he is seen as sort of a goof these days.  No, when the real False Prophet arrives he will truly have a commanding presence and will literally get the majority of the nations to fall for his pseudo miracles. 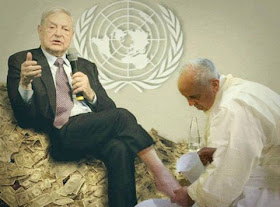 Second, he hasn’t setup the Antichrist’s Image in Jerusalem nor “Christian churches”.  Fr. Berrry (on pg. 138 of his commentary on the Apocalypse) records this teaching of the Church.  He will be personally responsible for getting Maitreya’s Images setup and Francis hasn’t done this nor is there any indication whatsoever he shall.

They make it clear the “Master Jesus” aka Yeshua Ben Joseph (Jesus Sunada?) will help setup Maitreya’s Image not only in “Christian” churches but also in Masonic lodges.

Again, share international says Francis is not the “Master Jesus” they are two different people.

I recently contacted them asking them if the “Master Jesus” was in the Roman or Jesuit curia (they say he is Rome and has disciples in the curia).  I await an answer. 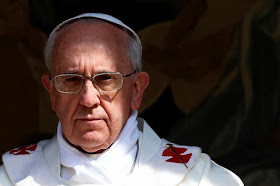 Third, he hasn’t setup the new religion’s “self-realization” sacraments.  These “sacraments” will be something altogether different from the Novus Ordo Sacraments which we hold as doubtful.

The ones forthcoming will obviously be illicit and invalid.

We disagree with the Sedevacantist evaluation on the Novus ordo Sacraments being invalid across the board.  These false new Sacraments will tie into the New Age’s self- realization program.

It appears there will be seven (possibly five), in complete counterfeit, of the true religion, one, of which, will be the hellish baptism that we call “the mark of the beast”.

Francis has not done this yet obviously but will he do this?  Does he time to do so?  From my perspective, no.

Sure, there are all kinds of crazy changes still to come and perhaps even some this year but he is not the one to formally setup the new age’s self-realization “sacraments”.  This job is for the real False Prophet, the Master Jesus to do.

Abolish celibacy and setup a new formal ecumenical rite for “Catholics”/Protestants probably.  However, no indication of “new sacraments” are forthcoming from the Vatican just yet. 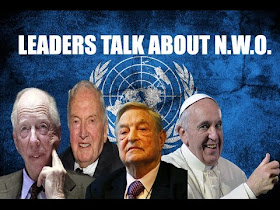 Fourth, up until this point he has not pointed to any other “figure” to be worshipped.  This is another job of the real false prophet who will directly point to another called the Antichrist and tell the nations to bow down before him.

More and more people don’t take Francis seriously at all.

The more the mainstream media tries to “beef him up” the more comical this sad routine becomes.

He is simply another setup man in this endgame revolution.  He is playing his part objectively speaking and preparing the way for the true False Prophet.

The true False Prophet will seemingly arrive after the economic collapse and worldwide revolutions.  He will arrive onto the scene and say he is over the “Christian churches”.

He is also said to be middle eastern/Syrian of which Francis is not.

He will not say he is Pope nor will he want to be called Pope.

It should be apparent to Catholics and heretics alike that the true False Prophet is the sidekick of the antichrist but as you know the majority will still follow along.

Fifth, talk of his resignation.  This doesn’t matter in a certain sense.  Pope Benedict XVI is the true Pope and until he dies it won’t matter what Francis does.  He has no jurisdiction and can’t “resign” form something he doesn’t hold.

What is possible is this though.  Perhaps, amidst, the revolutions in Europe, he just goes in cognito.  Where is Francis?  Is he dead?  What has happened to him?  Could these be some mainstream headlines in the not so distant future?

This would allow for an even shadier character the False Prophet to arrive onto the scene saying he is the chosen one to lead “Christians” now without Francis even “formally/publicly resigning”! 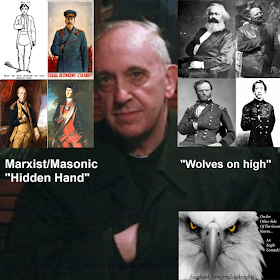 Sixth, building off of an earlier comment.  Francis hasn’t established the mark of the beast to be taken.  It is a part of the New Age’s “sacraments” and I’m not sure if anyone really takes seriously the possibility of him doing so.

We still have some time yet to be “warmed up” to the whole crypto currency craze we are going through.

The modernist’s still have theological agendas to get across until the mark can be introduced formally to the public.

Again, the False Prophet is the right-hand man of the Antichrist and Francis has been around for over five years now!  Where is the Antichrist?  He would have been on the scene by now.

It just doesn’t fit the prophetic timeline at all.

Francis has never publicly rejected the idea of him “not being Pope” which the true False Prophet will do.  Now, he has made heretical statements like there is no Catholic God and communists make the best Christians but he hasn’t formally said don’t call me Pope.

In fact, he has said (in relation to the BXVI controversy; two popes) that the Church has had two popes REIGNING AT ONE TIME before in church history.  This of course is absurd.  The true False Prophet when he arrives will formally say we are in a new age and that he is not a Pope, period.

As I continue to write more in the future I will continue to add to this list but for now I hope this helps.

*Also Francis is not Petrus Romanus nor the "last Pope".  Please stop reading Protestant commentaries who have no idea the "ins and outs" of Catholic prophecy...

Donations:  Please get in the fight with a financial contribution for this is an information war.  Please click the paypal button and get behind TradCatKnight financially.  I appreciate all your prayers and support!  For CASH, CHECK or MONEY ORDER contributions please email me at apostleofmary@hotmail.com for the mailing address.

For Contact: Questions and comments or to become a special guest on TradCatKnight Radio OR to have me on your own show please contact me at apostleofmary@hotmail.com
TradCatKnight at 4:07 PM
Share
‹
›
Home
View web version